Craket
September 24 edited September 24 in General discussion
I wanted to make an opinion thread about the newest release. And a message to the devs: dont let this discourage you!
To start off, we are getting lots of changes, to the name and file placement. This means your YL2 files are now redundant and character files should be moved over to FurryVNE (%appdata%/AppData\Roaming\FurryVNE\Characters). I will miss the name YiffaLicious2 greatly, I thought it was fun and cute. FurryVisualNovelingEditor as necessary as it is, is kind of boring. Although, this can change with where the app goes. From the looks of it, the name could be warranted regardless due to things that will later be added that do make the "Visual Noveling Editor" more justified. It also may be more accurate due to that.

On with the Update! ("Small" changes)

Another thing I advise people to do is go to Edit>Preferences: Change framerate to unlimited or something. I noticed lag when I first opened the app and saw the giraffe. But it was not lag, it was just limited to 30fps. Was spooked at first but its actually better now.
Opening the cloud is also much nicer, I was surprised that you made a change to help with making the cloud browser not lag at all.
I love the added QoL changes, like the + symbol on local assets leading to importing stuff,
Start up is quicker BECAUSE of the limited frames set,
Last opened character will open up first,
Setting a Default map, I always edit in Celestial.
Drag and Drops (This is actually really REALLY nice! will speed things up)
FOLDERS!!!!
but the best change of them all...
FurryVNE will now remember the last path where you opened/saved a file for importing/exporting.
I never asked for this... But inside, this is what I wanted from the beginning.
I also love that you guys fixed the issues we reported on. The TILT bug was actually the most frustrating one, as I did not know what or why it happened, so I did what I usually did and just worked around it.

SoftGlow Filter!
I love this filter, Although I kind of wish there was an easy toggle for it. Especially if we are going to be getting more filters to change the moods in the VNE part of the app. I rather edit outside of the filter, and then turn it on, since that will have me make the character proper instead of in a fake filtered colour. It is kind of like how Camera Light faked me into thinking the stages all had their lighting set until we could turn it off, then I realised how strong shadows really are and make for a proper realistic atmosphere. Just maybe, have a place for FilterS in the edit dropdown, and Maybe have a hotkey that cycles through them for the character editor. Its yours to decide.
Jittered Dithering!
I am unfortunately conflicted on this. The fluff that go soft do look better, but what I am conflicted about is that it boils, kind of like looking over a street at a hot day, where you can see the hot fumes from the street. (dont know what it is called). This boiling kind of distracts me, and I hope its not one of those "Now I cant unsee it" after mentioning it to you all. If there would be a fix, I dont think it will be that easy as even the previous dithering had this but in a much lesser scale. Graphically, I dont know what it is that does it, but regardless I will still use it. It does make the fluff look better, with just a slight distraction.
HOWEVER!
A good example is looking at my character Vimpin since she has the most obvious/exaggerate big soft fluffs on her hair I think. 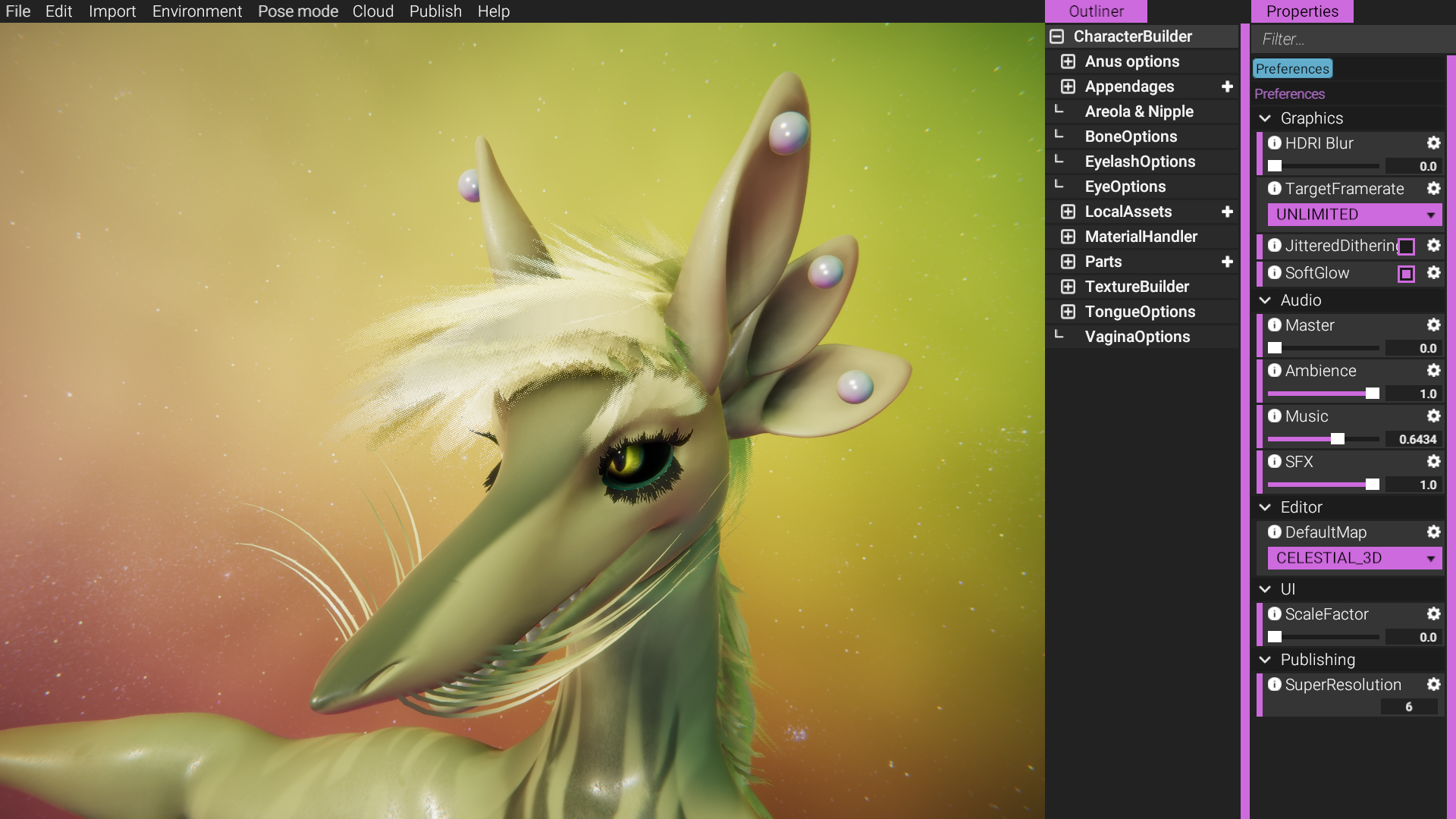 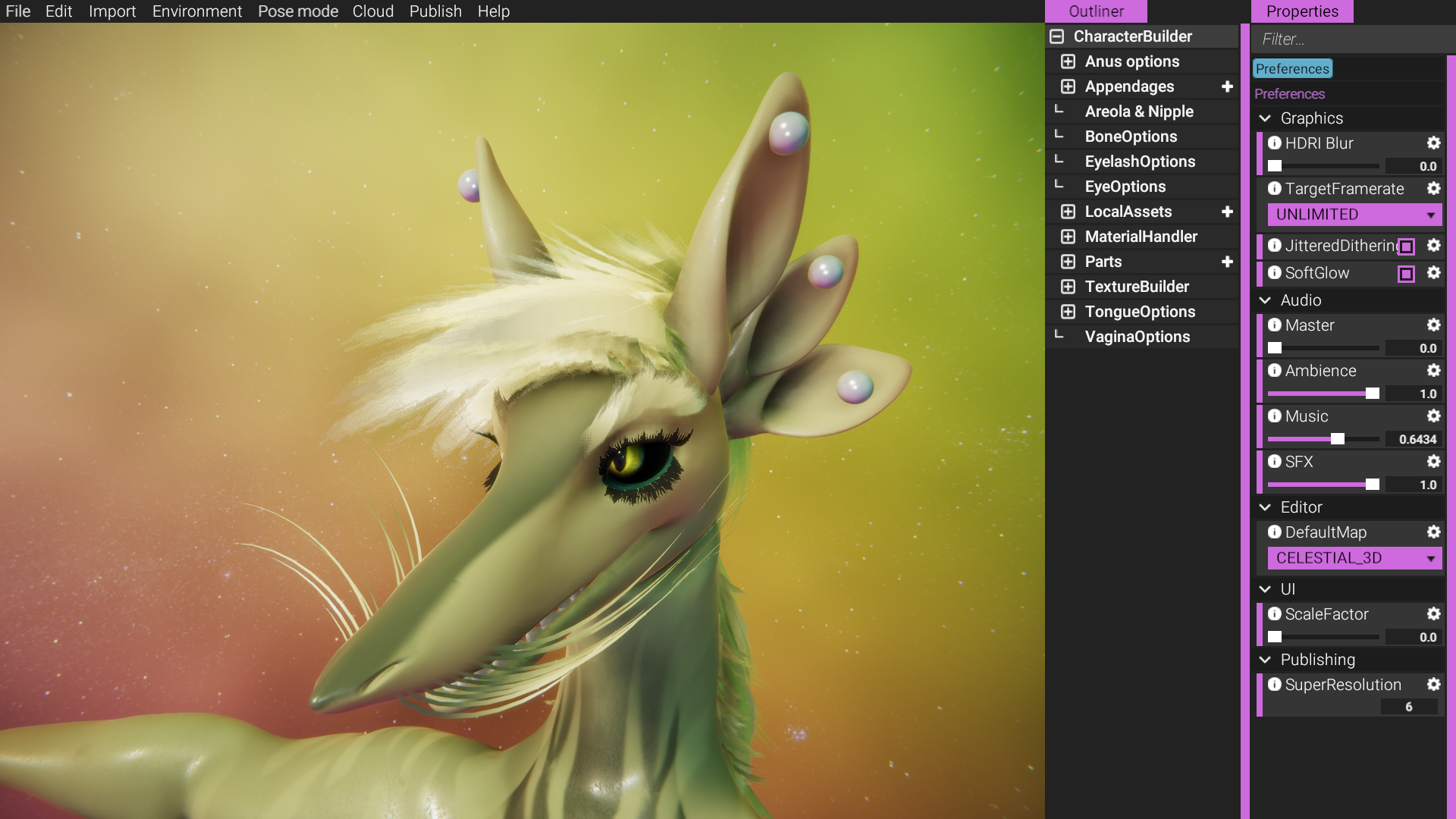 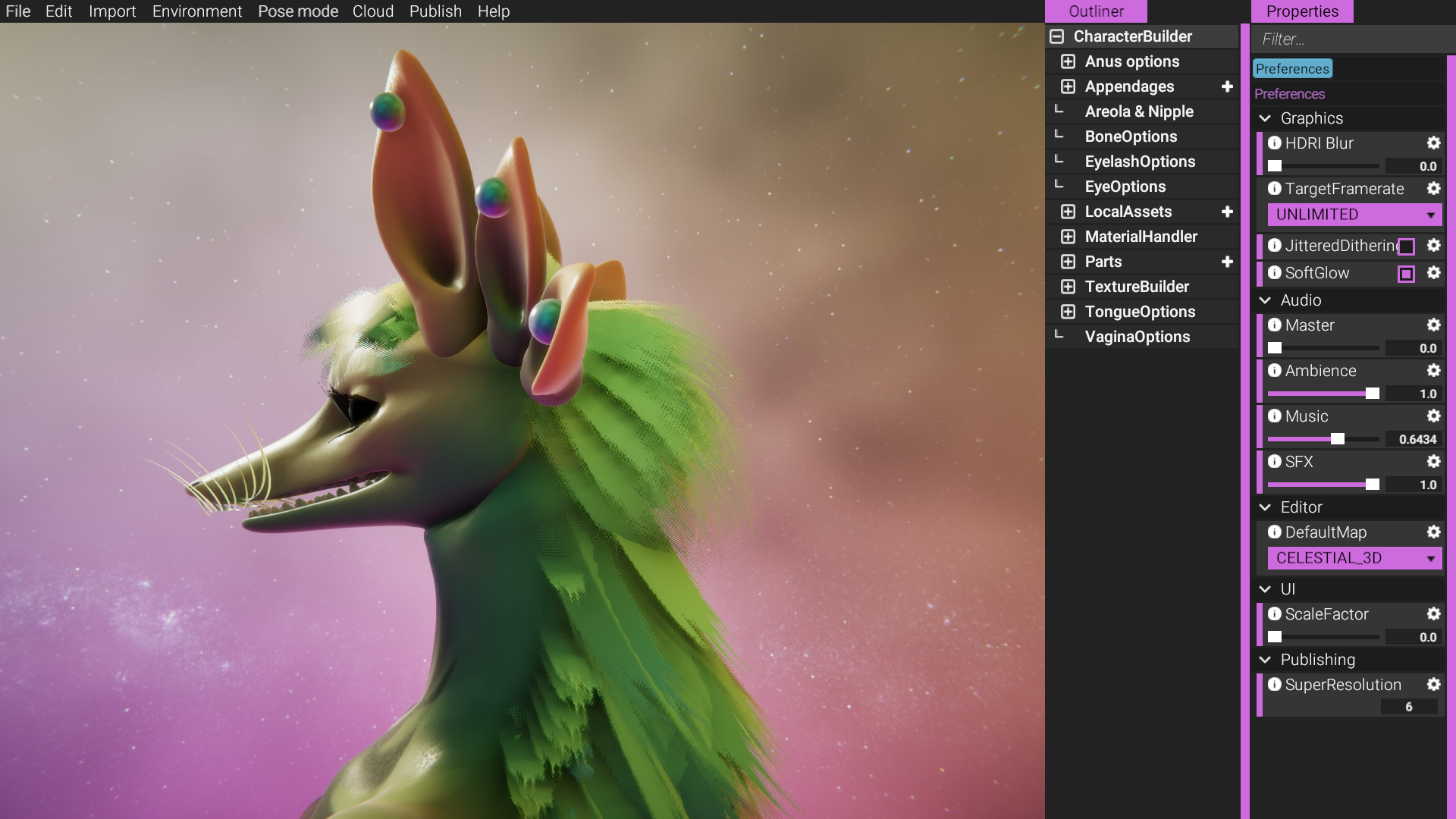 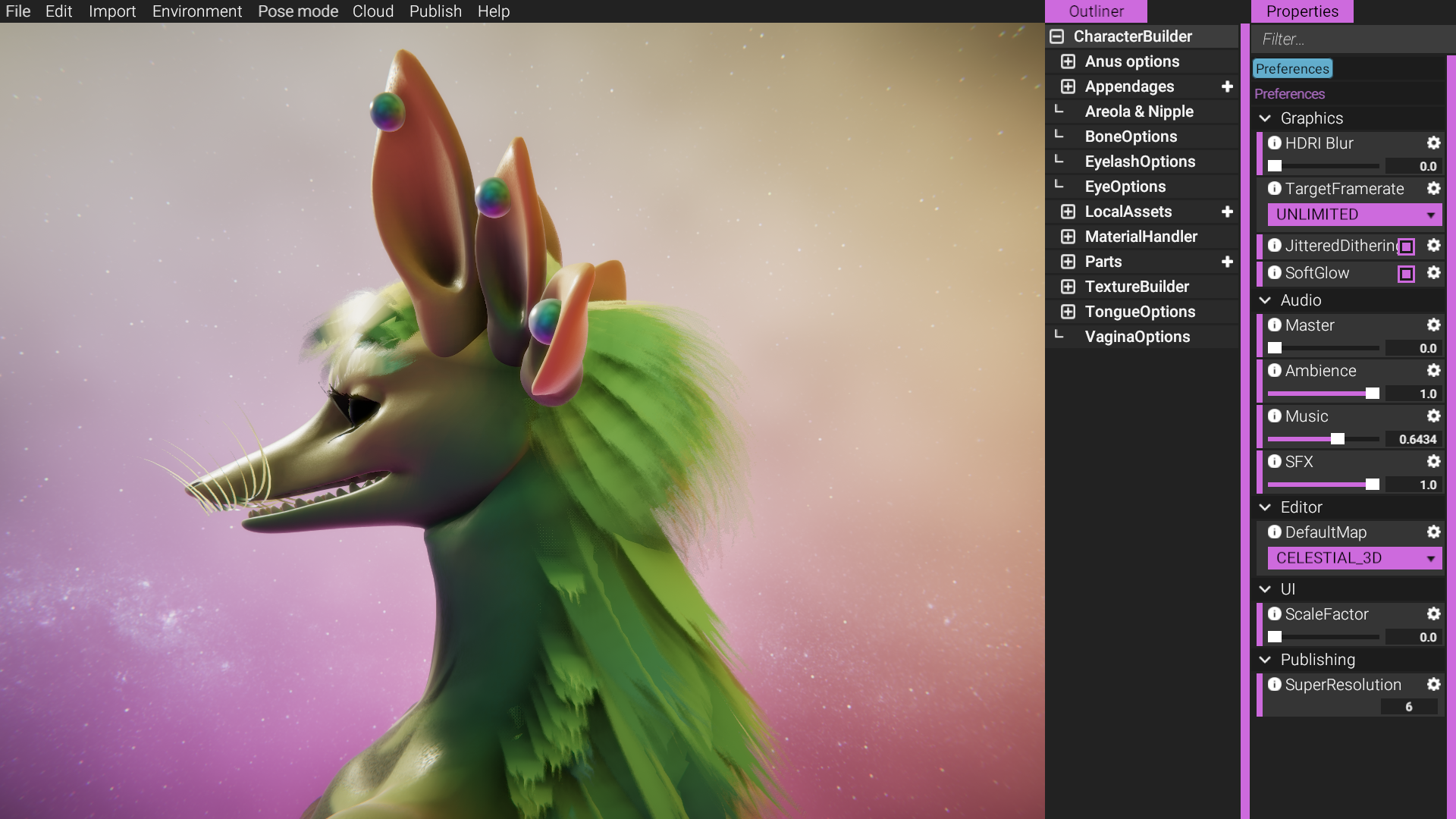 The new dithering actually makes her look better, I find it that she looks closer to what I imagined. The old dithering was an old artifact of dots, the new one does look better. Its just the distracting small boils that make things odd.
Big Canine Head! (Long concern ahead)
At first, I thought this head seemed too similar to Fox Head, then I came to Jowls_droopy and Jowls_Border, that is when I realised how versatile this will be. I also tried maxing out on every tweakable

Although, I am concerned for you @Dogson and maybe @Odes as well. The more heads with versatile tweakables, the more likely expressions could break the face, no?
And I dont know if you remember, but there was this very small jag on giraffes cheek that got more pronounced if you make them smile. Stuff like that I am concerned about when it comes to versatile heads, and also what KIND of expressions we will be able to give for our characters.
Will they be highly modular? as in, I have control of each facial feature one by one to combine for an expression I will make. Or complete expressions where One slider will change the entire face.
Or both?
And if anything, wont this be a lot of work for each head? We have 4 different canine heads, 2 of which are highly versatile, dragon and bovine head which is also versatile. All of which that could somehow make the face look awkward due to these versatile changes getting messed up due to expressions.
Its just a concern for the future. A lot of the future building blocks depend on the beginning blocks, for the sake of expressions, it is more wise to look for unique new heads instead of... you know 4 different Canine heads

Sorry for the criticism, its just that, this will turn into more work for less gain quickly if these heads are too similar and each new head gets better features. Similar to how characters in YL1 went from simple (Bunny) to being a lot more versatile (Dragon). Going back to update everything will be though work when it comes to FurryVNE content.
You guys probably know this better than me, BuuuUut There has to be a limit at which how far you want to take these things. I find the versatility of Dragon/Bovine head is enough, and the balance of expressions on top of every head should be relatively the same and planned out. Or else older content (Lets say Bunny head) will have lackluster expressions and shape versatility, while newer heads get all the features, and because of that, will get all of the attention and usage in the character editor.
I think about this in the sense of a fighting videogame balance. When you introduce a new character, how much of that character will have new stuff that will trump and override previous content/characters? Street Fighter feels the need to give and overhaul their systems and characters as new instalments on the same sequel. Then we have For Honor which has a LOT of issues overhauling and updating characters, and new characters simply are better and get mostly everything and new stuff.
So my advise is, be careful with the work you put into the heads as there will be more work for each head in the future, no?
New Layer Options!
I love this fine tuning the overall character, its really really really good! It lets me decide and fine tune the colours better without having to fine tune each and every colour. Its actually very in-depth if you know how to use and combine them.
But is this, and the new upcoming "clothing" an advent to alternating the same character?
I posted a suggestion a long time ago about "alternate colours" for our characters that we could set up. Now that Clothing to some extent is planned, an ability to change a characters appearance from a single character file looks more likely. Is this the plan? If I can have a clothed character and change them to nude, whos to say I cant change the colours in the same way? Which is why I think my suggested method of alternating the colours is now not as good as being able to change the character completely. And also why this new filtered layers are great if this is the case.
And ofcourse, the final big change
Exporting models with both parts, fluff and Textures
I am not that 3d savvy, but I definitely understand how good this is for those who like to go in and out of their 3D program with the character. I am certain this is probably the most wortwhile change, albeit the most advanced I think.
-----------------

I think this was a great update, and so far, it is pretty solid after all these releases. I cant find issues, maybe not yet. But this is as solid as it ever was. You would usually think a bug creeps up one after the other, but I really have not detected anything.
Accessibility like making the cloud work faster is a huge great change for the future, especially since there is a lot more planned for us to navigate through.
Drag and drops and folders also make character editing and future editing a lot more convinient and easy to use, again, can be a big pay off to continue to improve on areas of frustration or more convinient QoL stuff.
Just stuff that set up the future are great! Which is why I am so concerned about the Head.
I am not sure How much use I will get with the new content, as ive been trying to spruce up on my own stuff. But I do like where its heading.