We hope you've had a great May!

This month feels like we bumped into all sorts of different unexpected obstacles that required time and effort to solve. In last month's update when we mentioned the "seamless tech" we were working on, we thought it was more or less complete - all we needed was to assemble some content to try it out. Well, as it turned out, there was a bit more to it than we anticipated...

In case you don't know, essentially what this "seamless tech" is all about is eliminating seams* between different parts of the body. The head, hands and feet in YL2 will be possible to choose from an ever increasing selection of different models that you can combine in any way you like. For example, we won't just be providing one type of hand, but several different ones, from different species, of different shape and with different skeletons, and more will added with time. Likewise with the heads, they too will come from different species etc. However, as you might imagine, having separate models in this fashion inevitably creates visible seams where they connect with the body. This is a huge problem that what we've been trying to solve.

(* Seams between parts, not UV seams which is a completely different problem.)

This problem comes with several different challenges. The first one, or the most basic one, is perhaps the problem of actually making the meshes themselves (the models) look like a single one. This can be accomplished by making them appear to be "welded" together, and this is something we already showed off in a previous update.

Another problem is how skeletons are supposed to be merged together in such a way that all the different parts are water-tight regardless of how the bones are deforming the mesh. Furthermore, we wanted to have flexibility in how we can author skeletons to allow parts to have different numbers of fingers or just have completely different shapes (for example, the feet of a crow is completely different from those of a wolf). This, too, is something we've already created tech for previously (although we will probably need to tweak it a little bit once we get to creating more versatile content for it).

Lastly, we need to make the maps (textures) appear seamless where these different models connect, because even if the meshes appear seamless, the maps can still give them away. This is a difficult problem to solve due to the complex setup of all the possible combinations of models. It would be a nightmare to manually make each map fit with the other, so we wanted to come up with a tech that allows us to bake maps for each model individually while still having perfect seamless results. And this is what we've been working on this past time when we've been talking about the "seamless tech".

To solve this map problem, we need several different components working together. The content (mesh) has to be authored in a very specific way and then rendered using a custom shader. Or at least, those were the two components we thought would be sufficient to solve it. For these two things - the content and shader - we had an elaborate plan how they could be implemented, and we followed this plan meticulously. But once we actually had implemented the shader and created all the content and started testing, it didn't work! Or rather, it would have worked, if it wasn't for the fact that we had forgotten to consider a very important trait of how normal maps operate - you cannot blend normal maps across different tangent spaces! This was an utter failure on our part, forgetting to include such an important property into our plans, and so is where we encountered our first big obstacle for the month. And from this point onward, it felt a bit like this gif from the "Malcom in the Middle" show, as we had to spend time implementing several systems we hadn't originally planned for:

The first step to solving this map problem was figuring out a way to blend normal maps across different tangent spaces. In short, the way we ended up doing it was by feeding the shader with additional custom data that we baked into the mesh, so it would have enough to parse each normal map properly. This did however come with some other consequences, as it would mean we would have to feed this data each time the mesh is changed (for example, when blend shapes are applied), meaning we had to come up with a way to calculate the tangent spaces in a fast and efficient manner.

As with the mesh normals that we've talked about in previous updates, we ended up implementing a GPU powered tangent space calculator. Normally, recalculating the tangent spaces would take undesirable amount of time on the CPU, but by creating a GPU implementation, the results are near instant. Naturally, it did take some time to implement this system though.

Ok, so now that we are feeding the shader with this additional data with the help of the custom tangent space GPU calculator, surely we have enough to make this work? WRONG!

Well, wrong for characters meshes at least. For regular meshes, it would be sufficient. But characters are of a special type of mesh, called a skinned mesh, that does additional processing before rendering it, namely deforming the mesh according to the location and orientation of the bones. This process is known as "skinning". Unity provides a "Skinned Mesh Renderer" which automates this process. During the skinning process, not only are the vertices moved, but also the normals and tangents of the mesh are deformed as well. Since we are feeding our shader with additional mesh-specific data, we needed that data to be skinned too, but unfortunately, Unity's skinned mesh renderer doesn't support skinning of custom data. So in order to solve this problem, we ended up writing our own custom skinned mesh renderer, that skins all the mesh data - both the basic one and our own - and feeds it into the shader.

So yeah, in pursuit of trying to solve the seam problem, we ended up on a journey, not only implementing a GPU tangent space calculator, but also a custom skinned mesh renderer. It took time, effort and energy, but finally we made it to the finish line at last. 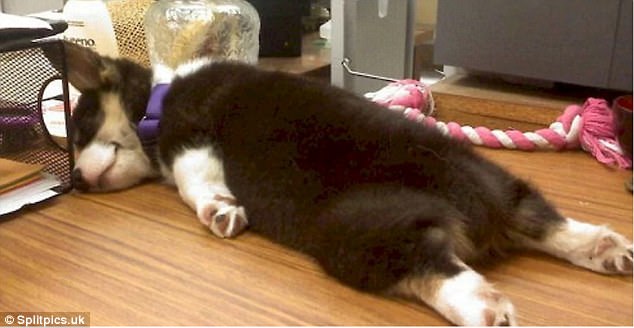 Here's the result of our research.

(Seamless tech off - for comparison)

We're super excited about this tech, as it puts us a step closer to making the characters look like actual, real models rather than something that was just assembled in a character editor.

In our original model, the balls were a forced part of the character mesh and wouldn't allow for such customization, but upon reading this feedback, we reevaluated our plans and took measures to accommodate these suggestions. The balls have now been moved out of the character mesh, and exist as a separate model. We like this idea, because it does make things a lot easier for use regarding shape authoring and transfer between models. Furthermore, it will also allow us to create many different kinds of shapes for the balls, improving customization and versatility, all while reducing complexity. We are so happy these suggestions were voiced!

Since the balls are a separate model, it also means you'll be able to add them to any character, even those without shafts, or without any genitalia at all. (We haven't gotten to implementing a genderless model yet, but we intend to in time. A genderless model is far easier to model than one with genitalia.)

There are some drawbacks with this type of setup however. By having the balls as a separate model, there is inevitably a visible seam/clipping where the body and the balls intersect. While we do like the increased customizability and reduced complexity that comes with moving the balls to its own mesh, we weren't happy about this clipping issue. So this month we've been researching different methods of trying to mitigate this problem.

We have implemented a shader that operates in "screen space" to blend models together with eachother. It is our attempt at reducing clipping between intersecting models, for example balls clipping with the body they're attached to. Below are images of our research:

(Toggling tech on and off.)

What's cool about this tech is that we could use it for other things too, such as ears on the head.

We also produced a variant of this shader that uses the G-buffer to blend the meshes. The benefit of using the G-buffer is that we can blend each channel individually. Here's a comparison of that technique vs the one above:

As you can see, the G-buffer one does produce a more "correct" looking surface where the models intersect, due to the normals being blended separately in their own layer.

However, the G-Buffer version doesn't play so nicely with shadows: 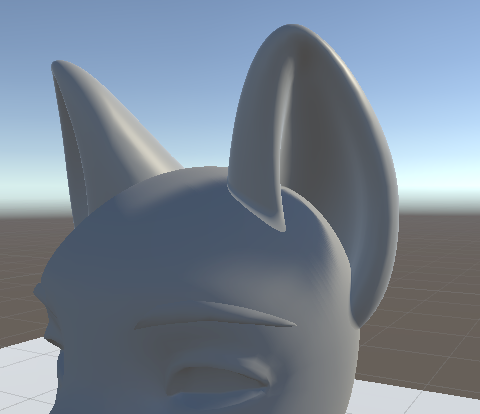 Here's the simple blending for comparison: 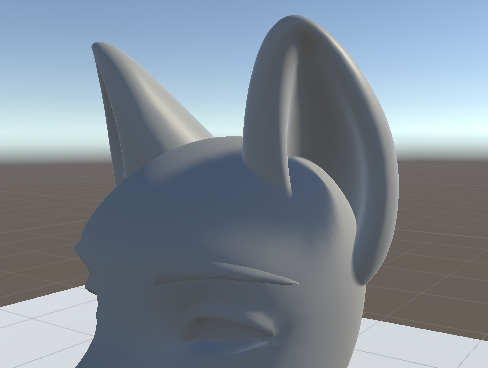 The G-buffer also come with other drawbacks, namely that it is a bit hacky and requires much more custom code in order to operate properly. Maintenance is an issue here too, as new versions of Unity might break the shader. This is especially a concern as we intend to move over to the HD Rendering Pipeline of Unity at some point in the future, which most likely has a completely different buffer setup, and that might even change more over time as the HDRP is a WIP. Sometimes going with the easier solution makes more sense long term, and in this case, I think the easier solution might even look better.

While dogson has for the most part been busy working on content for the seamless tech, he has also been working on shapes on the side. Here's a "SexGodess" shape he made: 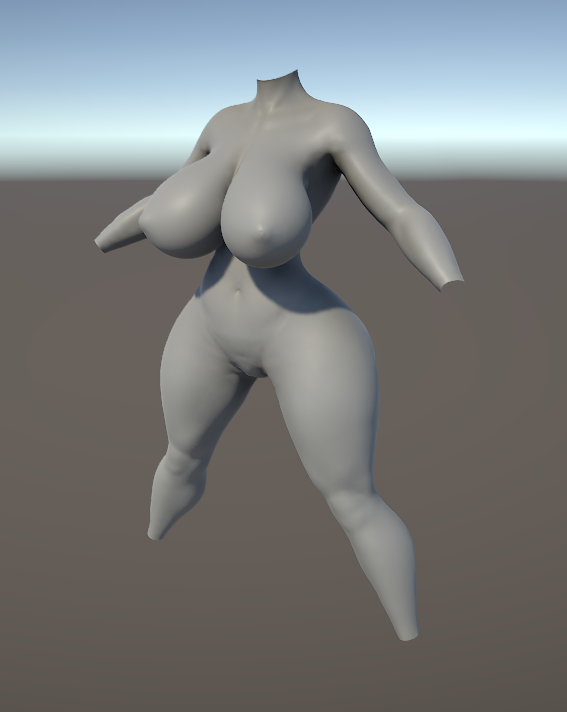 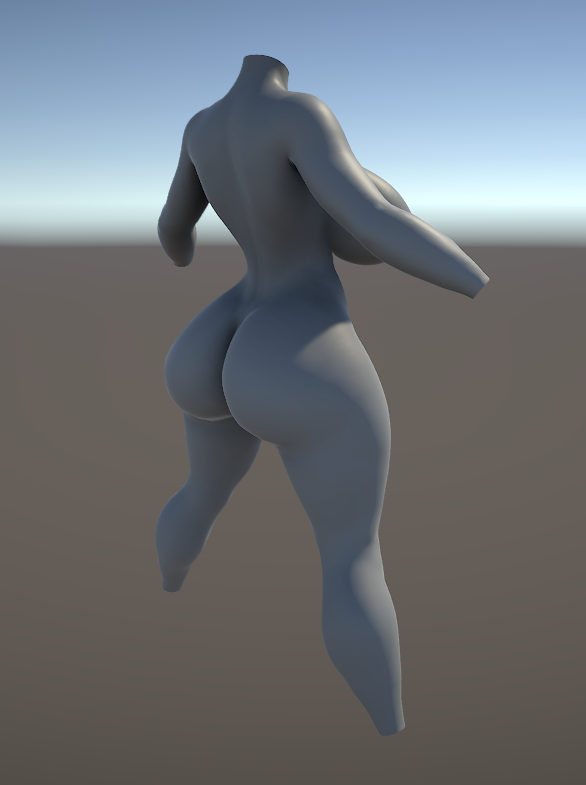 In YL2 we intend to create many different "body types" that you can select from. Each body type will be possible to tweak in terms of belly and breast inflation. You will also be able to mask and blend body types individually in the shape layering stack.

This month we ended up on a longer-than-expected journey in our pursuit of creating seamless characters for our character creator. What we thought would be an easy problem to solve turned out to be a fair bit more complex than anticipated. In the end we finally got what we wanted, but not without a tremendous amount of time and effort, having us implement several techs we originally had no idea would be required.

We've also made changes to our characters, separating the balls from being forcibly placed inside the male variants. This opens up for far more customizability while at the same time reducing complexity for us. It comes with some drawbacks however, as separating models in this fashion does produce seams between them, but we have been researching a screen space clipping relief tech that looks promising in mitigating this issue.

We are as excited as ever about the development. Things don't always go the way you think, as there are always potential obstacles lurking in the shadows. But we relish the challenge and are determined to reach our goals!

I know I mentioned a couple of texts back that I was going to start writing shorter texts. Well, it seems like that hasn't really been the case so far, haha. It's just that there's so much to each problem that we encounter and to each solution that we implement, that unless explained, they wouldn't feel so exciting. So as long as I feel there's a need for these explanations, I'm afraid we're gonna be stuck with these long texts!